The dawning of the age of the Nautilus

The dawning of the age of the Nautilus

In the year of its 40th anniversary, we take a look at what makes Patek Philippe’s Nautilus watch such an icon.

It’s been a bountiful year for fans of the Nautilus watch. Celebrating 40 years of life, Patek Philippe regaled its iconic sports watch with two anniversary models – one in platinum and one in white gold – and four celebratory auctions were staged by Christie’s around the world with 40 exceptional Nautilus models on the block. As one of the most desired and sought-after collectors’ watches, the last of the four-part auction saga took place on 6th December in New York with 10 Nautilus models that had collectors chomping at the bit, although the record price for a 1982 Nautilus sold by Christie’s in 2015 for $909,319 was not topped.

Named after Captain Nemo’s fictional submarine in Jules Verne’s 1870 adventure novel Twenty Thousand Leagues Under the Sea, Verne’s description of the submarine as “a masterpiece containing masterpieces” is, for many die-hard Nautilus fans, an apt description of the watch. With its basic design practically unaltered, let’s take a look at how the Nautilus has navigated seas of change to become a pillar of Patek Philippe’s business and the maiden voyage of the two new anniversary models. 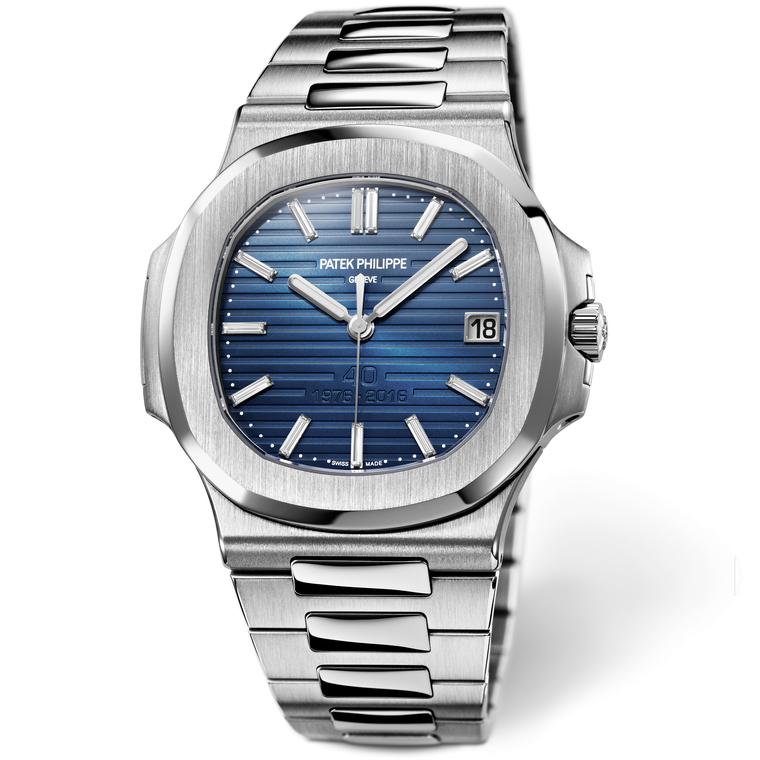 Both the platinum and white gold anniversary models are limited editions of 700 and 1,300 watches respectively. The Nautilus Ref. 5711/1P in platinum is reminiscent of the original Nautilus Ref. 3700 designed by Gérald Genta but with an increased diameter of 44mm. The platinum model comes with a dark, more intense blue sunburst dial and the hour markers are set with baguette diamonds to mark the grand occasion. However, what collectors will be looking out for is the anniversary citation that appears on the bottom half of the dial – 40 1976-2016 – and the fact that it comes in a special box made of natural cork, below, an exact replica of the 1976 box. For non-Patekologists, the cork box is an integral part of the Nautilus experience and the dream of many collectors is to get their hands on a vintage 1970s Nautilus plus its original box. 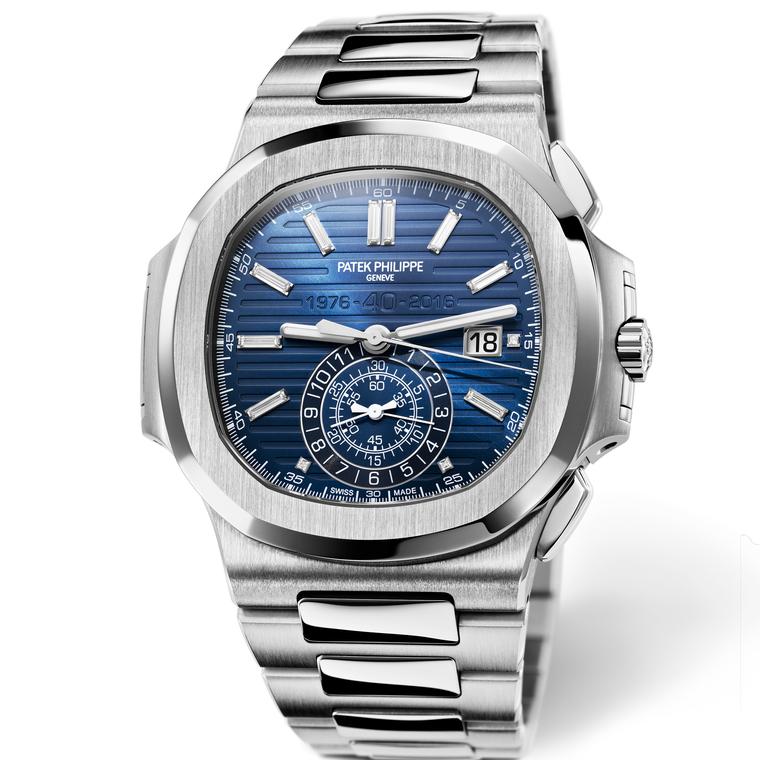 The white gold 40th anniversary model, the Nautilus Ref. 5976, is a flyback chronograph that occupies the place of its predecessor Ref. 5980, which was launched to celebrate the 30th birthday of the Nautilus a decade ago. With a diameter of 49.25mm, this model surpasses its predecessor by almost 4mm.

Set against the vivid blue dial, the chronograph counter at 6 o’clock condenses all elapsed time readings into one disc, organised in three concentric scales: the outermost scale features the 12 hours counter followed by the 1-30 minute counter and the 31-60 minute counter in the centre. Like its sibling, the hour markers are set with baguette diamonds and the anniversary dates are emblazoned on the embossed decor. 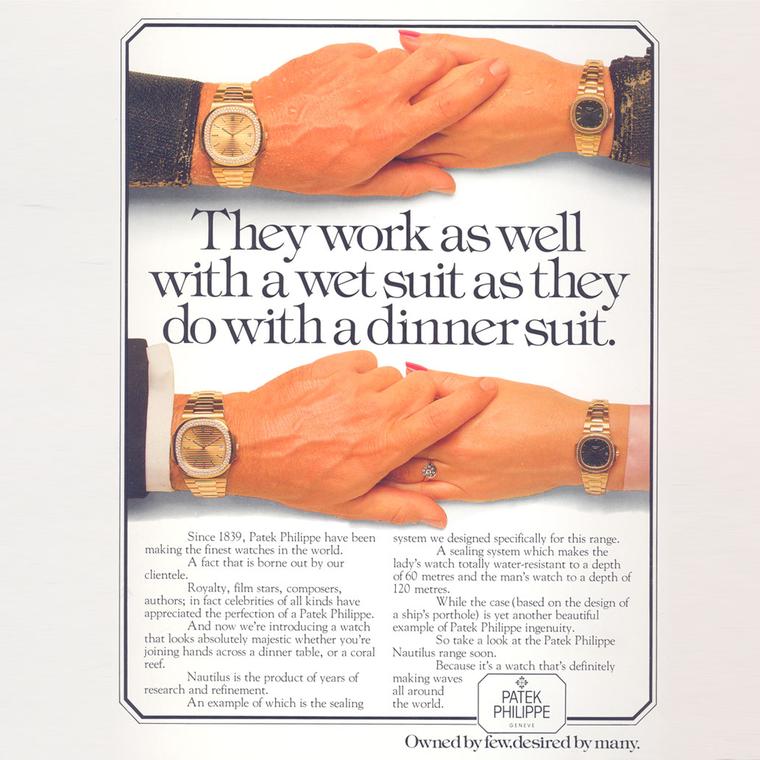 The origins of the Nautilus watch

The Nautilus was born in 1976, smack in the middle of one of the most liberal cultural and artistic revolutions of the 20th century. Henri Stern, president of Patek Philippe, decided it was the right time for a change and launched the brand’s first sports watch in its 137-year history. Not only was it a sports watch, it was made of steel and had a diameter of 42mm.

Although we are inured to XXL sports watches, back in 1976 the introduction of a 42mm steel watch was seen as a provocation and went directly against the grain of what was perceived as a Patek Philippe watch. At that time, Patek was associated with slender gold dress models or watches brimming with complications, and even a 36mm diameter was considered on the large side. Many of Patek’s more conservative clients were downright shocked by this steel intruder presented in a cork box. Capitalising on the seeming contradictions of the watch’s personality, Patek marketed the watch with taglines like “One of the costliest watches is made from steel” and “It goes with a wetsuit as well as with a tuxedo”.

Who designed the Nautilus?

Gérald Genta, one of the most gifted designers of the 20th century, was the man behind Patek’s Nautilus. Genta was also the brainchild behind other watch icons like the 1972 Royal Oak watch for Audemars Piguet – the first upmarket sports watch to rock the watchmaking establishment. With its irreverent stainless steel case designed to look like a porthole and its industrial design ethos, complete with exposed screws on the bezel, the watch bristled with counter-culture attitude.

Tapping into a similar fountain of inspiration, Genta revisited the maritime world and came up with the design of the Nautilus for Patek Philippe. In a fascinating 2009 interview with Constantin Stikas for Very Important Watches, Genta revealed how the creative process was sparked: “I was at the restaurant of a hotel and some people from Patek were sitting in one corner of the dining hall, while I was sitting alone in the other corner. I told the head-waiter: ‘Bring me a piece of paper and a pencil, I want to design something’ and I designed the Nautilus while observing the people from Patek eating! It was a sketch that I completed in 5 minutes… It very quickly met with success. I made the prototype in my studio and its success was accelerated.”

The DNA of the Nautilus

The iconic design of the Nautilus was inspired by the shape of a porthole on a transatlantic liner. Its octagonal bezel, softened and rounded in comparison to the Royal Oak’s more angular profile, was flanked on either side by two protrusions (called “ears” at Patek) emulating the hinges used to seal a porthole. To ensure its 120 metre water-resistance, the bezel of the Nautilus was fastened to the case by four screws hidden in the ears of the watch. With its large 42mm diameter, the Nautilus earned the nickname Jumbo, although I’ve also heard that the hinges placed on either side of the case led some people to believe they looked like elephants’ ears, hence the origin of the name Jumbo.

Other dominant genes of the original Nautilus – the famous Ref. 3700/1 – were its dark dial with thick horizontally embossed lines, its simple baton style indices and hour and minute hands, its date window at 3 o’clock and, naturally, the impeccable mirror polished and satin-brushed finishes on the steel case and integrated bracelet.

John Reardon, Christie’s head of watches and an expert in all things Nautilus, reveals a little-known fact in the mythology of the Nautilus: the steel used on the early Nautilus watches was chosen for its resilience to extreme temperatures, pressure and corrosion. The same kind of steel, in fact, that had been used “extensively in the construction of tanks during World War II”. 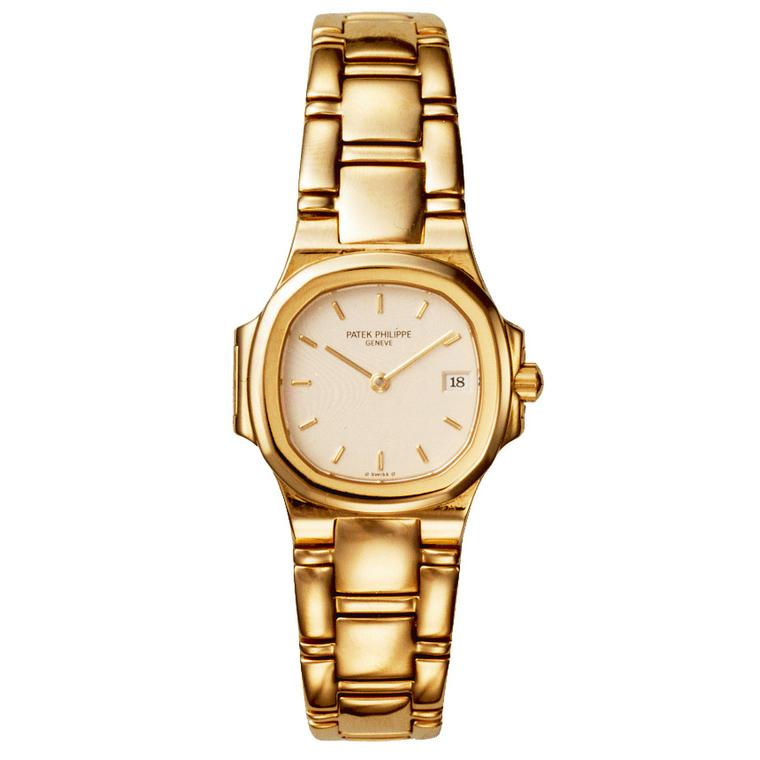 The first women’s version of the iconic Nautilus made its appearance in 1980 in steel, steel and gold, and all gold (pictured).

The tenacious genetic markings of the Nautilus have ensured a coherent, instantly recognisable identity over the last four decades. Originally produced in steel, the Nautilus eventually crossed over into precious metal territory in 1980 with a women’s model, Ref. 4700/1, presented in steel and gold.

Complications have been incorporated over the years and even fully-set diamond models have made their appearance, but for many purists, Ref. 5711 is the Nautilus of choice and the closest you can come today to the original 1976 model – unless you were at the Christie’s auction in New York yesterday and have a big smile on your face.

Hublot goes for gold with its new Big Bang chronograph

Introducing the formidable Hublot Big Bang chronograph, which is capable of keeping up with the fastest man on Earth: Usain... read more

With Daniel Craig looking set to return as 007 and a new homage to the super spy from Omega,... read more

Which Rolex watch should I buy?

It’s a big decision, so here is our guide to which Rolex men’s watch you might be tempted to... read more